GARDEN CITY, N.Y. – After trailing by as many as three goals early on, the seventh-ranked Merrimack College men’s lacrosse program weathered the storm, fought back and eventually pulled ahead for good in the third quarter before holding off third-ranked Adelphi late to send the Warriors back to the semifinal round of the NCAA Division II Men’s Lacrosse Championship for the fifth year in a row, the nation’s longest active streak.

Senior Michael O’Connell netted the decisive tally with 6:34 to play in the contest; the Panthers pulled to within two with 3:30 left, but sophomore Christian Thomas, who finished with a game-high five points on three goals and two assists, came up with a key response a minute later to go back up by three. Adelphi would only get one more the rest of the way, as the Warriors earned another road win – their second in four days – to advance in the national tournament.

Those dramatics followed a back-and-forth first half; the Panthers built a three-goal lead before Merrimack answered with three straight to draw even (4-4). The Warriors would go up by two, but the seesaw affair continued as Adelphi went back up by a goal before ultimately conceding the equalizer before the half. The slugfest ensued in the third until a goal by long stick midfielder Christian Glover gave them a 10-9 lead that they would never relinquish.

Awaiting Merrimack in the national semifinals is top-seeded Le Moyne, the 2019 Northeast-10 Conference champion, which dispatched fourth-seeded Mercy earlier today. The two rivals, which have already met twice this season (and split both meetings), will face off next Saturday (May 18) at noon in Syracuse. 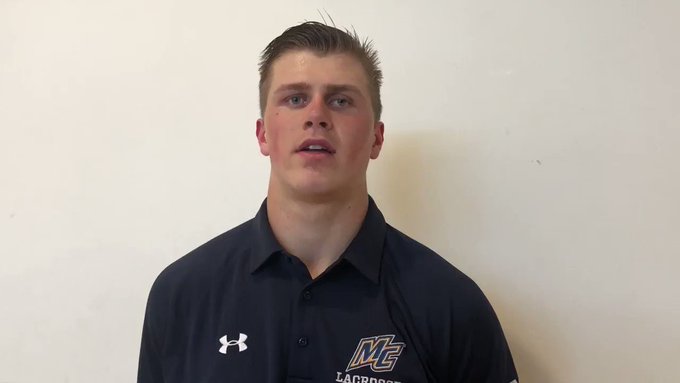 Up Next
Merrimack will head back to the national semifinals for a fifth straight season and will look to avenge its one-goal NE10 Semifinal loss against top-seeded Le Moyne next Saturday (May 18). Game time from Ted Grant Field is set for 12 p.m.

Dartmouth Down to Finalists

Matt Brooks Transferring to Merrimack as a Grad Transfer